So you want to be a marine biologist?


When I conduct psychological evaluations for people applying for Social Security Disability, here's what I can count on if the claimant is between the ages of 18 and 29 years old: When I ask them what their plans are for the next couple of years, they will say (pick one):
1. "Don't have any -- I sorta live day by day." [modal response]
2. "Get my own place, go to college, I want to do like forensic science, be a crime scene investigator."
3. "Get my own place, go to college, I want to be a marine biologist."
The first answer has the benefit of being honest, and rather insightful, considering the YOLO attitude that landed you in my consulting office. The second answer is attributable to the popularity of CSI and its spin-off shows. But don't worry, I doubt that most crime labs are populated by people whose disability claims were rejected. At least I hope that most police departments disqualify applicants who have a criminal record or who have not graduated from high school.
The last answer is increasingly popular, which I suspect is due more to Shark Week than to the inspiring instruction in biological science in our public schools. "Marine biologist" seems to have the cachet that used to be reserved for "astronaut" or "polar explorer". I have been noticing a lot of mentions of marine biology in current advertising, e.g. the proud parents of a new "marine biology" graduate get her an awesome cell phone plan. When the star of the moronic Fast and Furious movies died, fittingly (not "ironically"), in a fiery car crash, much was made in his obits of his dabbling in marine biology at "several" community colleges. (If you're interested, this would be the appropriate Introduction to Marine Biology textbook at a California community college.)
Well, if you are dreaming of becoming a marine biologist, might I suggest instead that you drop out of school, buy a guitar, and start submitting demo tapes to record companies? Because there are a hell of a lot more successful rock musicians than there are marine biologists. I suspect that there is a special circle of hell reserved for college administrators who created a "Marine Biology" program at their crappy little college just to attract marginal students who never miss "Shark Week" but who otherwise would not have gone to college. In five or six years, less than half of them will have graduated, and all of them will be swimming (ouch) in debt.
If that doesn't dissuade you, check this out refreshing tirade by an actual marine biologist (Source):

"So you want to be a marine biologist? Well sonny, or sonnette, as the case may be, why don’t you just sit down and let a real marine biologist give you some damn good advice. And wipe that smirk off your face, sit up straight and for goodness sakes stop fidgeting! You’d think you had lice the way you are carrying on. You do? Oh well, never mind.

First of all there are three really, really bad reasons to want to be a marine biologist. If you have even an inkling that these are yours, please run away as fast as possible, ‘cause neither you nor we will be happy.

Three Really, Really Bad Reasons to Want to Be a Marine Biologist

Reason Number One: "I want to be a marine biologist so that I can talk to dolphins."

Believing this is simply the Kiss of Death. This is the verbal equivalent of reaching down your throat, pulling out your own intestines, wrapping them around your neck and choking yourself. When we hear this our impulse is to thwack you a good one on your keester with the frozen haddock we keep within arm’s reach just for this occasion.

And why is that? It is because, and please listen carefully, while you may want to talk to dolphins, dolphins do not want to talk to you. That’s right. Mostly, dolphins want to eat fishes and have sex with other dolphins. And that pretty much cuts you out of the loop, doesn’t it? Oh, I know that there are the occasional dolphins that hang around beaches, swim with humans and seem to be chummy, but these are the exceptions. You don’t judge the whole human race by the people who attend monster car rallies, do you?

Just be honest with yourself. If you want to talk to dolphins you don’t want to be a biologist. What you really want to do is explore your past lives, get in touch with the Cosmic Oneness and conduct similar-minded individuals on tours to Central America looking for evidence that We Are Not Alone. Our experience is that people who feel this way last about 6.5 minutes in any biology program.

Reason Number Two: "I want to be a marine biologist because I really like Jacques Cousteau."

Reason Number Three: "I want to be a marine biologist because I want to make big bucks."

Okay, here’s the bottom line. By Federal law, marine biologists have to take a vow of poverty and chastity. Poverty, because you are not going to make squat-j-doodly in this job. Just how squat is the doodly we are talking about? Well, five years after finishing my PhD I was making slightly less than a beginning manager at McDonalds. Ooh, a 36 year old guy with 13 years of college and 5 years of post-doctoral experience making just about as much as a semi-literate 19 year old with pimples the size of Bolivia, who can speak perhaps 3 words at a time before the term "you know" enters the conversation.

And chastity because, well, who’s going to date a marine biologist? The smell alone tends to dissuade a large proportion of the opposite sex."

By the way, to the best of my knowledge, Jacques Cousteau was not an alcoholic. 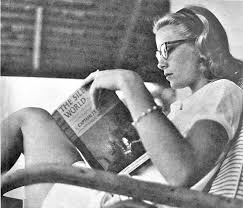 Grace Kelly, more of a marine biologist than Paul Walker
Posted by Unknown at 8:00 AM