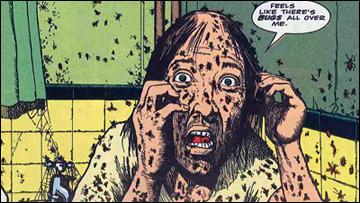 Formication: A tactile (or "haptic") hallucination in which there is a false perception of a crawling sensation either on or under one's skin. Most commonly associated with heavy use of cocaine or methamphetamine ("meth mites"), or during withdrawal from alcohol (delirium tremens). The patient may report feeling "bugs crawling under my skin" or seeing "ants all over my arms." People will scratch vigorously at the affected areas, causing excoriations or even deep gouges in their skin. Psychotic drug users have used knives or other sharp implements in order to get at what they perceived to be insects burrowed under their skin. The condition was first reported among chronic cocaine users in 1889. "Formication" is derived from the Latin word for "ant," formica. Another condition, delusional parasitosis, is more commonly found in non-drug using middle aged women. These patients come to believe that their bodies have become infested with tiny parasites or worms. They will often collect "evidence" of the infestation in small plastic bags and bring them to their physicians. To the doctor's eyes, the bags usually contain nothing but lint or dust, but the patient insists that these are parasite body parts. The women are not reassured by physical examination or negative test results. In many cases, the husband is also convinced of the presence of his wife's parasites (folie a deux, the madness of two).