"The Billfold Syndrome is an episode of MASH my partner David Isaacs and I wrote in 1978. It’s part of the 7th season if you want to find or rent a copy and watch it. And it’s probably airing right now on three cable channels. 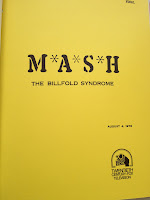 Here’s the premise: A young medic arrives at the 4077th with amnesia. Psychiatrist Dr. Sidney Freedman is summoned, who (along with Hawkeye and B.J.’s help) hypnotize the young soldier to bring him back to the exact time and place he lost his memory. They recreate the battle complete with sounds and role playing. It’s maybe the most dramatic scene we’ve even written. I won’t spoil the ending should you not have seen it yet.

There’s also a subplot where Charles learns he’s been passed over for chief of thoracic surgery at Massachusetts General because he’s in Korea. In frustration he vows never to talk to anyone in the camp again, which of course is laying down the gauntlet for Hawk & Beej who then go to outlandish lengths to get him to talk.

A terrific actor – Kevin Geer played the young medic. Alan Alda directed masterfully, wringing every laugh and tear out of the script.

The title “Billfold Syndrome” is a psychiatric expression: Someone looks at his I.D. or billfold and can’t place himself. 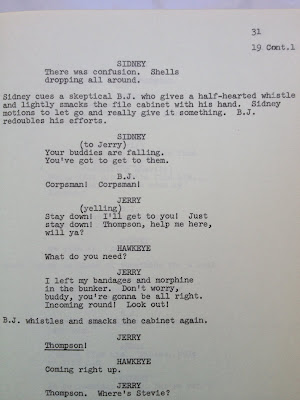 This story came right out research. Larry Gelbart, Gene Reynolds, Burt Metcalfe, and then later me and David, interviewed doctors, nurses, corpsmen, soldiers – anyone who served in Korea. Most of the stories done on MASH were inspired from these interviews."
Posted by Unknown at 5:00 AM

Email ThisBlogThis!Share to TwitterShare to FacebookShare to Pinterest
Labels: psychotherapy