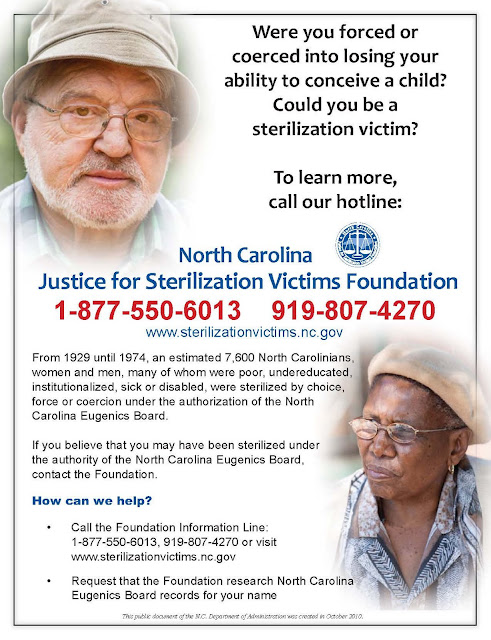 
"From the early decades of the 20th century until 1974, 32 states in the union mandated the sterilization of more than 65,000 citizens. At the behest of government eugenics boards, girls and women had their tubes tied or uteri removed, and boys and men their vasa deferentia snipped because they had been deemed unfit to reproduce. Still others came under the scalpel of private doctors, and this second group makes the calculations difficult—65,000 represents only the number of sterilizations where there was municipal paperwork.

In 2013, the North Carolina General Assembly passed the Eugenics Compensation statute, and last week the state’s department of commerce began the long-awaited disbursement of financial reparations to victims of sterilization. Two hundred twenty living victims will receive checks of $20,000 each—220 checks, out of 768 claims. Between 1929 and 1974, North Carolina sterilized at least 7,600 people. However mortifying the disparity here, we must give the Assembly credit for passing legislation that no other state has so far brought to a vote; by contrast, California has kept positively mum about its own similar history, which accounts for a third of all American sterilizations."

Oddly, the author of this piece later seems to laud Roe v. Wade as an advance in civil rights, rather than regard it as a continuation of eugenics by other means. The disparity in abortion rates between high and low income women tells the tale. Nearly 70% of U.S. women receiving abortions earn less than $22,000/year. The federal government, by funding Planned Parenthood ($360 million in 2009), the nation's largest abortion provider (over 300,000 in 2009), happily supports the effort to limit reproduction among the poor. And don't forget the 2.4 million Americans who are currently incarcerated -- long-term incapacitation tends to depress fertility rates as well.

Email ThisBlogThis!Share to TwitterShare to FacebookShare to Pinterest
Labels: eugenics