﻿
﻿
If you haven't read John Hershey's Hiroshima, you should. Most of the book is free on the New Yorker website, but the book as a good "whatever happened to..." final chapter.

"On the train on the way into Hiroshima from the country, where he lived with his mother, Dr. Terufumi Sasaki, the Red Cross Hospital surgeon, thought over an unpleasant nightmare he had had the night before. ...In his dream, he had been at the bedside of a country patient when the police and the doctor he had consulted burst into the room, seized him, dragged him outside, and beat him up cruelly. ...

At the terminus, he caught a streetcar at once. (He later calculated that if he had taken his customary train that morning, and if he had had to wait a few minutes for the streetcar, as often happened, he would have been close to the center at the time of the explosion and would surely have perished.) He arrived at the hospital at seven-forty and reported to the chief surgeon. A few minutes later, he went to a room on the first floor and drew blood from the arm of a man in order to perform a Wassermann test. The laboratory containing the incubators for the test was on the third floor. With the blood specimen in his left hand, walking in a kind of distraction he had felt all morning, probably because of the dream and his restless night, he started along the main corridor on his way toward the stairs. He was one step beyond an open window when the light of the bomb was reflected, like a gigantic photographic flash, in the corridor. He ducked down on one knee and said to himself, as only a Japanese would, “Sasaki, gambare! Be brave!” Just then (the building was 1,650 yards from the center), the blast ripped through the hospital. The glasses he was wearing flew off his face; the bottle of blood crashed against one wall; his Japanese slippers zipped out from under his feet—but otherwise, thanks to where he stood, he was untouched.

Dr. Sasaki shouted the name of the chief surgeon and rushed around to the man’s office and found him terribly cut by glass. The hospital was in horrible confusion: heavy partitions and ceilings had fallen on patients, beds had overturned, windows had blown in and cut people, blood was spattered on the walls and floors, instruments were everywhere, many of the patients were running about screaming, many more lay dead. (A colleague working in the laboratory to which Dr. Sasaki had been walking was dead; Dr. Sasaki’s patient, whom he had just left and who a few moments before had been dreadfully afraid of syphilis, was also dead.) Dr. Sasaki found himself the only doctor in the hospital who was unhurt.

Dr. Sasaki, who believed that the enemy had hit only the building he was in, got bandages and began to bind the wounds of those inside the hospital; while outside, all over Hiroshima, maimed and dying citizens turned their unsteady steps toward the Red Cross Hospital to begin an invasion that was to make Dr. Sasaki forget his private nightmare for a long, long time."

Captain Lewis, co-pilot of the Enola Gay, shares a handshake with Tanimoto, who then backs, up putting him at an awkward distance between Lewis and Ralph Edwards, who's still consulting his book. Captain Lewis explains haltingly how they got the order to target Hiroshima, how the bombardier aimed, how they dropped the bomb and then turned fast to avoid the blast.

And then the two concussion waves hit the ship. Shortly after, we turned back to see what had happened. And there in front of our eyes, the city of Hiroshima disappeared.

Now you entered something in your log at that time.

As I said before, Mr. Edwards, I wrote down later, "My God, what have we done?"

And so, Reverend Tanimoto, you on the ground, and you on your military mission, Captain Lewis, in the air, both appealed to a power greater than your own.

Lewis is the one you're most worried about watching this bizarre blind date. Ralph Edwards is pleased. Tanimoto is respectful, but Captain Lewis looks like he's breaking down. People say he went to a bar before the show and came back drunk.

In 1971, Lewis sold his famous log from the flight and used the money in part to buy Italian marble for his new hobby, sculpture. The piece he's known for is a mushroom cloud, with streams of blood flowing down the side. 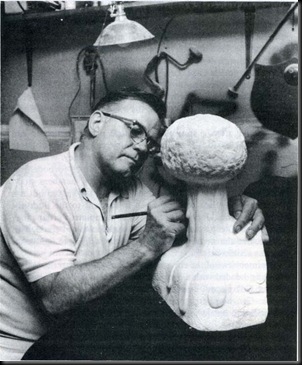