So...Will a graphic like this increase or decrease the risk of inspiring a copycat killer?


This is a great piece worth reading in its entirety. It's by the executive editor of The New Atlantis, an online journal that I read regularly and strongly recommend. The author suggests Media Guidelines for the reporting of mass shooting incidents, all of which seem like good sense to me. We've had media guidelines for the reporting of suicides for years and it's possible that they have had some good effect.

I appreciate this article's emphasis on the anger and resentment of these attackers. Most media coverage focuses on mental illness and access to firearms, which rather misses the main issue: Why are so many men in our society so angry and resentful? What sickness within our society is producing such symptoms?

The article also makes the excellent point (obvious in hindsight) that for every perpetrator, there must be hundreds of ideators (i.e. people who thought about conducting a massacre but didn't, for whatever reason). The parallel with suicide is clear: for every completer, there are 25 attempters, and thousands of ideators. How interesting would it be to find and study a large group of near-attackers? Such a study might even yield ideas about how to thwart future attackers.


How might journalists and police change their practices to discourage mass shootings? First, they need to do more to deprive the killer of an audience:

Never publish a shooter's propaganda. Aside from the act itself, there is no greater aim for the mass killer than to see his own grievances broadcast far and wide. Many shooters directly cite the words of prior killers as inspiration. In 2007, the forensic psychiatrist Michael Welner told "Good Morning America" that the Virginia Tech shooter's self-photos and videotaped ramblings were a "PR tape" that was a "social catastrophe" for NBC News to have aired.

Hide their names and faces. With the possible exception of an at-large shooter, concealing their identities will remove much of the motivation for infamy.

Don't report on biography or speculate on motive. While most shooters have had difficult life events, they were rarely severe, and perpetrators are adept at grossly magnifying injustices they have suffered. Even talking about motive may encourage the perception that these acts can be justified.

Police and the media also can contain the contagion of mass shootings by withholding or embargoing details:

Minimize specifics and gory details. Shooters are motivated by infamy for their actions as much as by infamy for themselves. Details of the event also help other troubled minds turn abstract frustrations into concrete fantasies. There should be no play-by-play and no descriptions of the shooter's clothes, words, mannerisms or weaponry.

No photos or videos of the event. Images, like the security camera photos of the armed Columbine shooters, can become iconic and even go viral. Just this year, the FBI foolishly released images of the Navy Yard shooter in action.

Finally, journalists and public figures must remove the dark aura of mystery shrouding mass killings and create a new script about them.

Talk about the victims but minimize images of grieving families. Reports should shift attention away from the shooters without magnifying the horrified reactions that perpetrators hope to achieve.

Decrease the saturation. Return the smaller shootings to the realm of local coverage and decrease the amount of reporting on the rest. Unsettling as it sounds, treating these acts as more ordinary crimes could actually make them less ordinary.

Tell a different story. There is a damping effect on suicide from reports about people who considered it but found help instead. Some enterprising reporters might find similar stories to tell about would-be mass shooters who reconsidered. 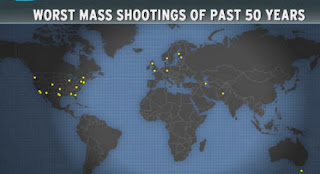 Would that it were as simple as improving mental health care and reducing access to firearms. Anomie is a much tougher nut to crack.