Today’s Google Doodle [November 8, 2013] honors the 129th birthday of Swiss psychiatrist Hermann Rorschach (1884-1922), who, in 1921, introduced the inkblot test, which has been used to diagnose schizophrenia and borderline personality disorders, among other conditions. He would hold up cards and ask people what the drawings look like, and the idea behind the test is that people will project their feelings onto “ambiguous stimuli”. Now Googlers can take a version of it and share their interpretations of the inkblots on Facebook, Twitter, and Google Plus — though you’ll have to go to a real doctor to get a diagnosis.


In a 1962 article, TIME magazine summed up the pros and cons of the method — first published in Rorschach’s book Psychodiagnostics — at a time when University of Texas psychologists developed inkblot sets to rival the Rorschach ones:


Though some critics dismiss the Rorschach as an exercise in “clinical liturgy.” most psychiatrists and psychologists still give it high marks for uncanny ability to reveal the innermost secrets of a test subject’s personality and emotional problems. But it has one drawback: interpretation of the results is a difficult job in which even experts often disagree. Rorschach testers often have to ask questions to draw out more than one response to each blot, and judgment may be colored by the interplay of personality between tester and tested. 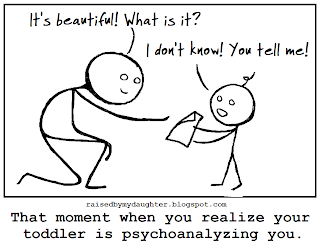 Source: Neurocritic
Posted by Unknown at 8:00 AM