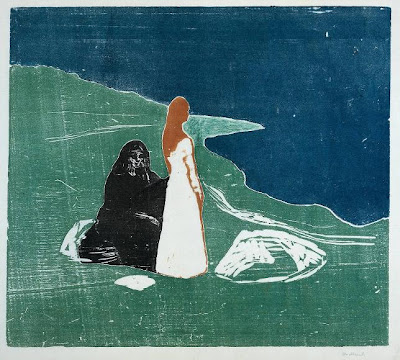 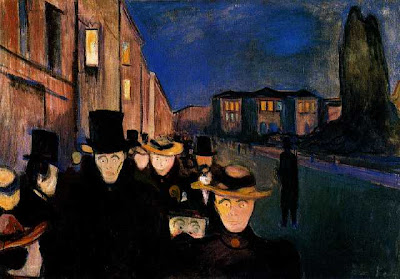 
"A Norwegian born expressionist painter, Edvard Munch lived a tumultuous life, which was represented in his paintings. As a child, he was often ill in the winter, and kept out of school. To pass the time, he spent his days drawing. He also had a troubled childhood, as his mother died of tuberculosis after the birth of his youngest sister, and his favorite sister died of the same illness nine years later. His father was also a bit of a religious fanatic, who would read Edvard and his sisters ghost stories and the stories of Edgar Allen Poe. The vivid ghastly tales, combined with his poor health, the young Munch was plagued by nightmares and paranoid visions of death, which he would later incorporate into his artwork." 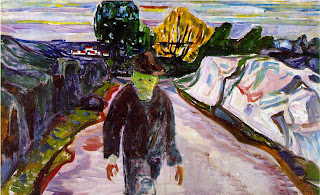 
"In his teens, he moved from drawing and dabbling with watercolors to painting with oils, and he only spent one year in technical college before he left to follow his dream of being a painter. His early paintings brought much unfavorable criticism, and his father rebuked him for his artworks, but continued to give him a living allowance. Later, unhappy with Munch’s paintings, he destroyed one of his nudes, and refused to grant him any more money for his art supplies.

Munch lived much of his life in a nihilistic, bohemian lifestyle, in which binge drinking and brawling were the favorite pastimes, to his father’s constant disapproval. After his father’s death, which left the Munch family destitute, Munch, felt that everyone around him had died, and was plagued by suicidal thoughts. His personal tragedies and psychological idiosyncrasies evolved into a symbolic art form that expressed more internal emotion and feeling than projected an image of outside reality. He often refused to sell his paintings, calling them his children, and so would create reproductions of them to sell." 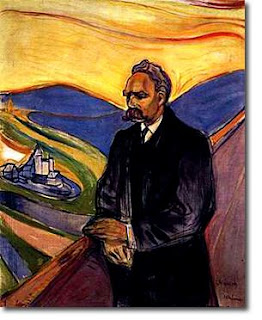 Friedrich Nietzsche (1906)
"His critical reception improved by the 1890s, and the attendance to his exhibitions increased, although reviews remained bleak. In 1898, he began a relationship with Tulla Larsen, who wanted to get married. Munch, fearing marriage as much as sexual relationships, fled Tulla a year later. In a later reconciliation attempt, there was an argument in which a gun went off, injuring two of Munch’s fingers. He never married.
In 1908, Munch had an acute break with reality, seeing hallucinations and suffering feelings of persecution, as if he was on the brink of insanity. He began therapy, including a controlled diet and electrification, which stabilized his personality. Thus began a more financially and professionally successful phase in his life, where he received many commissions and was able to provide well for his family. He spent the last two decades of his life in relative isolation, painting at one of his many estates. Today his legacy, once smeared with rumors that he was a Nazi sympathizer, includes many robberies of his works, high prices at auction, and his face now being featured on the Norwegian currency."


The text of this post was lifted from Wikipaintings, which I encourage you to explore.
Posted by Unknown at 9:00 AM