Jonathan Kellerman, a former clinical psychologist himself, created a memorable detective-psychologist -- Alex Delaware, Ph.D. I read several of these novels as an undergrad and in the first year of grad school. I won't go so far as to say that Alex Delaware is a "heroic ideal" for a clinical psychologist, but Kellerman makes him look pretty good (and thus the profession in general). As I recall, each book's plot involves a different interesting psychological/psychiatric phenonomenom, e.g. Munchausen's syndrome, child geniuses, school shootings, etc. I won't go so far as to say that you will learn a lot about the profession from reading these crime novels, but your interest in the field might increase substantially, as mine did. 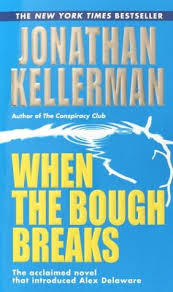 Kellerman also wrote a interesting book called Savage Spawn. It was written in the wake of Columbine and said some refreshingly harsh things about child psychopaths. It's a quick, bracing book to read, and much at odds with the usual touchy-feeling stuff offered up by psychologists.

﻿
Here are synopses of the first five Alex Delaware novels (I always prefer to read a series in the order in which they were published). It looks as if they are re-issuing the first novel, so the timing of this post is pretty good.

When the Bough Breaks (1985)
Kellerman introduces Alex Delaware, Ph.D., in When the Bough Breaks. Kellerman characterizes Delaware as a successful (albeit retired) child psychologist suffering from burn-out after working on a case of systematic child molestation that culminates when the offender commits suicide in Delaware's office. Detective Milo Sturgis urges Delaware to come out of retirement and interview a seven-year-old child who may have witnessed a crime. Sturgis appoints Delaware as a "special consultant" to the Los Angeles Police Department.[7] Kellerman's timing in this novel coincided with news stories about child abuse in child care facilities.[8]

In Blood Test, Alex Delaware acts as a consultant in the divorce and child custody case of Richard Moody, a bipolar and potentially dangerous father of two. At the same time, Delaware is contacted by a former colleague, Dr. Raoul Melendez-Lynch, of the oncology department at Western Pediatric Medical Center. Dr. Raoul Melendez-Lynch asks Delaware to consult with Mr. and Mrs. Swope whose child, Woody, needs treatment for cancer. Before Delaware has the opportunity to visit Woody, he vanishes from the hospital and the parents turn up murdered. Delaware sorts through a maze of clues to find the child.[9] Additionally, Kellerman highlights the issue of established medical treatments and new "cult cures" for children.[8]

In Over the Edge, Kellerman presents Delaware's back story as a researcher in the study "Project 160", that involved the treatment of gifted children. As the novel opens, Delaware receives a phone call from Jamey Cadmus, who had been involved in the research project. Jamey has been arrested and accused of being a serial killer who preys on young male prostitutes. Delaware is hired by Cadmus' attorney to investigate. In this novel, Kellerman examines preconceived notions about homosexuality; and he examines how others perceive Delaware because of his friendship with Milo Sturgis. In the course of the investigation, Delaware eliminates the obvious clues and discovers a greater evil than he imagined.[10] Additionally, Kellerman investigates psychological problems resulting from childhood genius.[8]

In Silent Partner, Kellerman has Delaware involved in a romantic interlude with a former girlfriend. Delaware's lover apparently commits suicide, and he begins an investigation into her death. His lover's identity becomes the focus of the investigation, as Delaware peels away layer after layer to discover a maze of childhood abuse.[8]

Time Bomb highlights a school shooting at a Los Angeles elementary school; although the only fatality is the shooter herself, Holly Lynn Burden. Holly's father contacts Delaware and asks him to perform a psychological autopsy. During the course of the investigation Delaware encounters dysfunctional families and political extremism as he races to unravel the real villain as he pulls together all the threads.[11]