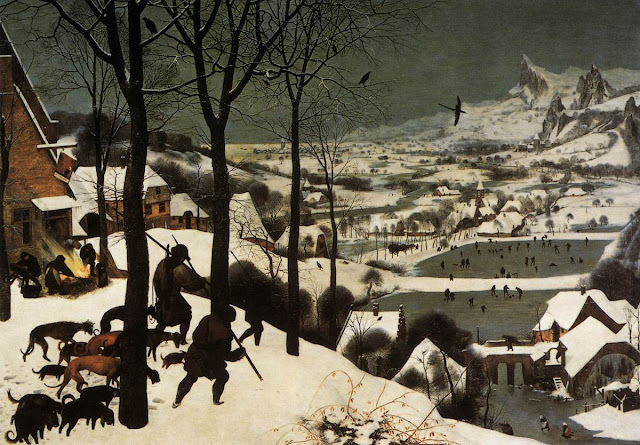 
And then the unfamiliar... 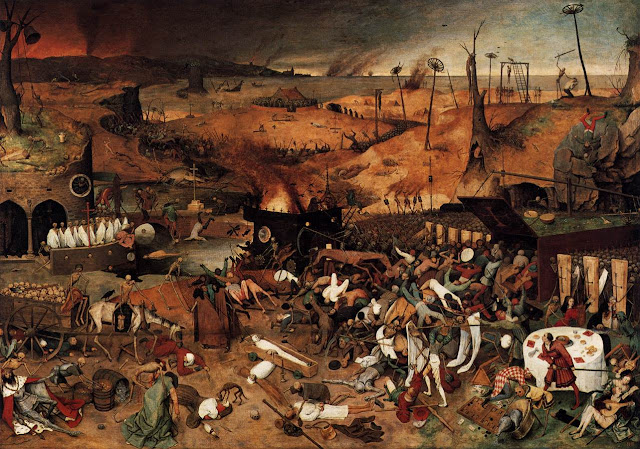 Once again, I refer you to the Wall Street Journal's excellent Masterpiece feature.

"The Triumph of Death" by Pieter Bruegel the Elder is not for the squeamish. Commonly dated circa 1562, it ranks among the most terrifying paintings of the age, and the centuries since have only boosted its fearful currency. Not until Goya's 1810-20 "Disasters of War" was there anything in European art quite like this savage depiction of hell on Earth.

The painting hangs in the Prado in Madrid, directly across from Hieronymous Bosch's "The Garden of Earthly Delights." As Bruegel was regarded by his contemporaries as a "second Bosch," they make fitting roommates. Both artists were favorites of Phillip II, who secured multiple works by each for the Hapsburg collections in Spain and elsewhere.


Bosch's large and elaborate triptych attracts the bigger crowds, and it's easy to see why. His naked men and women and fantastic animals can be viewed as drug-addled comedy, more Lewis Carroll than Book of Revelation. Even scholars can't agree if the arcane allegory is a remonstration about the demons of lust or the dream of a prelapsarian paradise before sex became sinful.

Bruegel's smaller (46-inch-by-64-inch) single-panel masterpiece has a grimmer message. There is no escape from the scourge of war. The men and women in the fire-strewn landscape try to fend off death's henchmen with sword and spear. But the living are badly outnumbered, their efforts futile. Not only is death inevitable and unsparing of society high and low, a lesson Medieval and Renaissance artists never tired of teaching their audiences, but death is perversely creative as well. The variety of tortures in store for the human race during wartime is endless. The hallucination is as intense and action-packed as Bosch's, but the cold-bloodedness of the violence leaves no room for whimsy.

Given the immense popularity of Bruegel, art historians know amazingly little about his biography. When he was born (c. 1525-30) and where is open to debate. His early training remains a mystery. The first documentary trace of his existence is his 1551 signature in the Antwerp artist's guild, the guild of St. Luke. A successful printmaker before turning to painting in the 1550s, he was no peasant and had a clientele of well-connected, urban patrons throughout the rest of his life. From a church monument that Jan Bruegel erected to his parents, we know that Pieter the Elder died in Brussels in 1569.

It's therefore hard to tell whether the scenes in "Triumph of Death" are purely imagined, conventions based on earlier artists' infernal visions, eyewitness observations of war atrocities, or a combination of the three. Philip II's zealous general, the Duke of Alva, did not arrive in the Low Countries until 1567. But a Spanish-directed terror campaign against Protestants and other heretics had already been in effect for decades.

However unknowable many aspects of the painting may be, including the religious sympathies of its author, it presents a virtuosic whirlwind of destruction. As a storyteller, Bruegel tended to fill his canvases with related human and animal actions, of more or less equal weight, that unfold simultaneously on several planes in undulating landscapes that are more than backdrops.

Every inch of "The Triumph of Death" features chaos on a massive scale. It is as though the artist's brush cannot keep up with the fanatical energy of death's hordes, busy killing and harrowing wherever you look. The realistic details of suffering invite our scrutiny and upon examination turn out to be far more unsettling than in a typical Medieval "Dance of Death."

The raging, centerless battle is not a fair fight. In the foreground, a skeleton is cutting a man's throat while not far away a starving dog eats a woman's face. On a hillside further back on the right, a dead man has been skinned and hung from a tree. His head is thrown backward and held in the branches by a metal pin that passes through his skull. In the vicinity a man hangs from a gallows, watched by onlookers, and a few inches to their right a man on his knees is about to be decapitated. Other victims are impaled on spoked wheels that sit atop poles.

In a ghoulish touch, the dead advance on the outnumbered humans and hold coffin lids as shields, emblazoned with the sign of the cross. The king with his ermine-trimmed robe and buckets of gold is as helpless as everyone else. At the top of the picture ships are aflame or sunk in a harbor while smoke rises from distant towers. This temporal plot point is especially chilling, for it suggests death has been marauding across the countryside for days, if not weeks, and has nowhere been halted. Indeed, the army appears unstoppable.

Salvation through Christ, a resolution in many other pictures that warn of death's inevitability, is missing here. The resounding overtone is one of mocking nihilism. The pulling on a black bell by a pair of skeletons in the upper left corner, instead of ringing out the goodness of the Angelus or the triumph of the Second Coming, seems to announce that humanity is done for.

The brutality of these images has given Bruegel's picture a woeful and continual relevance. It seems to anticipate descriptions of the Thirty Years War in the 17th century, the horrors of which Jacques Callot drew and etched. Most disturbing from a 21st-century perspective are what appear on the right of the picture to be rectangular containers where humans are forced inside and sent to their deaths. The devices' similarity to Nazi technology of mass extermination has struck many viewers.

Such secular readings don't qualify as responsible art history, but they explain the painting's status as a nightmarish icon. Unsigned and undated, it lacks a distinct religious meaning, even in the 16th century of the artist's shadowy life, and whispers insidiously to a world in which ferocious civil wars and graphic video games are daily visual fare. The first section of Don DeLillo's novel "Underworld" is titled "The Triumph of Death" and includes a fantasy in which J. Edgar Hoover compares Bruegel's painting ("a census-taking of awful ways to die") to nuclear war. The image was the cover art for Black Sabbath's "Greatest Hits" album, and its disquieting mood permeates the battle scenes in director Peter Jackson's epic "The Lord of the Rings."

The 19th-century Swiss historian Jacob Burkhardt derided Bruegel as a crude and vulgar painter. It is these same qualities -- a willingness to inject barnyard realism and seasonal atmosphere into his moral tales -- that make him so beloved today. "The Triumph of Death" may resist interpretation as a Christian allegory. But the burned, dirty, leafless landscape of war is all too familiar.