Here's a report on a series of studies that purport to show that reading a few minutes of "literary fiction" improves scores on a test of emotional empathy ("Reading the Mind in the Eyes"), compared to reading non-fiction. Reading popular fiction did nothing to improve scores over those of non-reading controls.


People ranging in age from 18 to 75 were recruited for each of five experiments. They were paid $2 or $3 each to read for a few minutes. Some were given excerpts from award-winning literary fiction (Don DeLillo, Wendell Berry). Others were given best sellers like Gillian Flynn’s “Gone Girl,” a Rosamunde Pilcher romance or a Robert Heinlein science fiction tale.

In one experiment, some participants were given nonfiction excerpts, but we’re not talking “All the President’s Men.” To maximize the contrast, the researchers — looking for nonfiction that was well-written, but not literary or about people — turned to Smithsonian Magazine. “How the Potato Changed the World” was one selection. “Bamboo Steps Up” was another.

After reading — or in some cases reading nothing — the participants took computerized tests that measure people’s ability to decode emotions or predict a person’s expectations or beliefs in a particular scenario. In one test, called “Reading the Mind in the Eyes,” subjects did just that: they studied 36 photographs of pairs of eyes and chose which of four adjectives best described the emotion each showed.

Is the woman with the smoky eyes aghast or doubtful? Is the man whose gaze has slivered to a squint suspicious or indecisive? Is she interested or irritated, flirtatious or hostile? Is he fantasizing or guilty, dominant or horrified? Or annoyed that his tech stock dropped half a percent on the Nasdaq in a round of late trading after news from the Middle East? (Just kidding — that last one isn’t on the test.)

The idea that what we read might influence our social and emotional skills is not new. Previous studies have correlated various types of reading with empathy and sensitivity. More recently, in a field called “theory of mind,” scientists have used emotional intelligence perception tests to study, for example, children with autism.

But psychologists and other experts said the new study was powerful because it suggested a direct effect — quantifiable by measuring how many right and wrong answers people got on the tests — from reading literature for only a few minutes.

“It’s a really important result,” said Nicholas Humphrey, an evolutionary psychologist who has written extensively about human intelligence, and who was not involved in the research. “That they would have subjects read for three to five minutes and that they would get these results is astonishing.”

Dr. Humphrey, an emeritus professor at Cambridge University’s Darwin College, said he would have expected that reading generally would make people more empathetic and understanding. “But to separate off literary fiction, and to demonstrate that it has different effects from the other forms of reading, is remarkable,” he said.


Caveat: When your results are "astonishing" and "remarkable," be prepared for when they do not replicate. It would be interesting to see a study of college students enrolled in a literature course (to see if their scores improve from Time 1 to Time 2) and also their roommates not taking a literature course that semester. I would also like to see a study of the reading habits of graduate students in clinical psychology who are rated as excellent psychotherapists by their supervisors versus those rated as average.

Vocabulary skill is a potential moderator of Reading the Mind in the Eyes scores, but I doubt that reading for just a few minutes affected vocabulary enough to account for the effect -- unless reading passages with more emotional/interpersonal vocabulary temporarily activated those cognitive networks, thus making those vocabulary words more accessible during the test.

As I have suggested before, I would rather engage in psychotherapy with a therapist who reads Dostoevsky and Melville than with one who reads books about the brain. It would be lovely if a case could be built that shows that the reading of literature can make you a better (e.g., more empathetic) person. 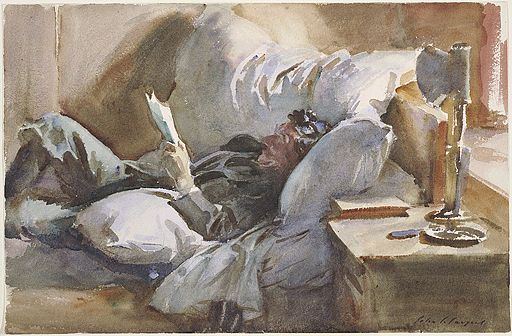