After Ferguson: Police Officers Shot or Killed in the Line of Duty


The following opinion piece, written by a police officer, is getting a lot of attention. I added some links to the referenced incidents, to provide some context.


"Since the shooting of Mike Brown, and the month-plus-long circus that followed, the number of law enforcement officers being shot in the line of duty has skyrocketed, but the average citizen has no idea this is happening.

The national media jumps all over a story where an 18-year-old criminal punk, who shot at a cop, is shot and killed. That criminal is made out to be some sort of victim by many outlets. That story is front-page news all over the country.

Did you know that in just three days last week, six cops were shot in the line of duty, one of whom was killed?

Oct. 7, Chicago: One officer, a captain, is shot in the face and chest. Other officers at the scene take fire and are pinned down by the suspect. [The suspect, wanted in 3 other shootings, was arrested. Another man, who happened to be with the suspect at the time the warrant was served, was killed by police at the scene. It is unclear whether or not he shot at the police. Witnesses say that he didn't. The wounded officer did not require surgery for his injuries.]

Oct. 8, North Las Vegas: An officer is shot during a gunfight with a suspect. [The suspect was shot and killed at the scene.]

Oct. 8, Phoenix: An officer on a traffic stop is shot in the face. The suspects flee; the officer calls for help. Two other officers arrive and start rendering aid, only to come under fire from the suspects who circled back and attacked the responding officers. [A week later, the bad guys have been identified but are still on the loose. UPDATE: They caught them.]

Oct. 8, Oklahoma City: Two officers are shot by a suspect during the same event. [The officers were responding to a reported hostage situation; the woman who was apparently the hostage was shot to death by a suspect who was then shot, but not killed, by an officer.]

Oct. 9, Midland County, Texas: Sgt. Mike Naylor is shot and killed while responding to a report of a sexual assault. [The officer was trying to talk a suspect, wanted for aggravated sexual assault on a child, out of a barricade situation. The suspect, after killing the officer, eventually surrendered. He was unharmed by the arresting officers and has been charged with capital murder.]

Where are those stories in the national news?

What does it say about the media who make a victim out of a criminal, and ignore the good guys being injured and killed trying to keep society safe?"


Here's a link to the great Officer Down Memorial Page, which tracks police officer fatalities. I used data from the National Law Enforcement Officers Memorial Fund to create this chart: 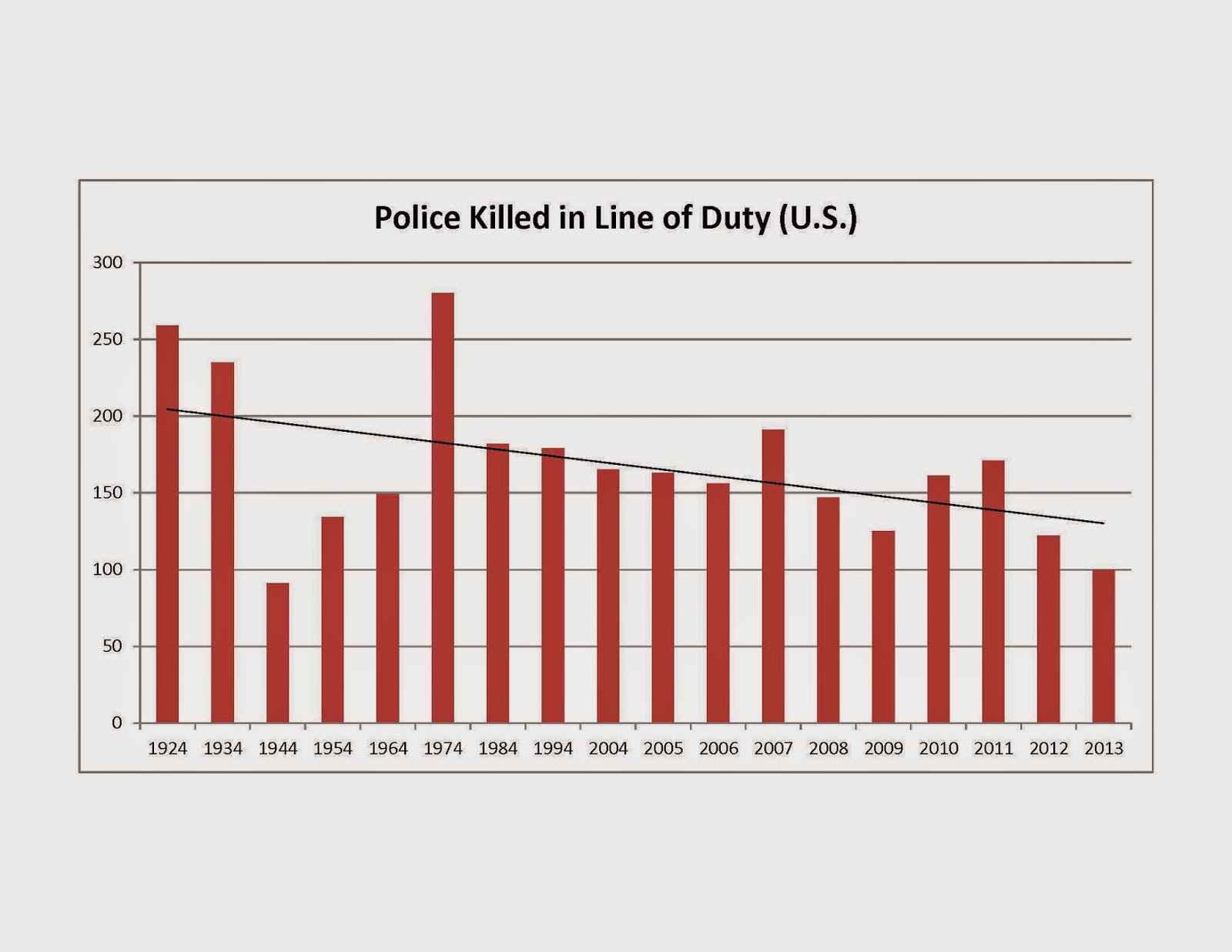 Well, for one thing, it used to be a whole lot more dangerous to be a cop in the U.S. -- especially when you consider that these are raw totals, not rates -- so the number of killed officers has been decreasing even as the number of police has been increasing.

That was quite a bloodbath during Prohibition and the Depression. And it seems like there was some "rally round the flag" effect during WWII -- or did we just conscript a lot of potential cop killers and turn 'em loose against the Nazis? There was a postwar uptick, but it wasn't until the 1970s (think Taxi Driver and The French Connection and Serpico) that all hell broke loose.

Since then, there seems to have been a steady decline in officer deaths in the line of duty. I'm sure that body armor and airbags have had something to do with it. The proliferation of SWAT teams may also have helped. Emergency medical services and Life Flight helicopters must also be playing a role. There may be more cops being shot but surviving wounds that would have been fatal in the 1970s. Lessons learned on the battlefield in Iraq and Afghanistan could be saving lives in the U.S.