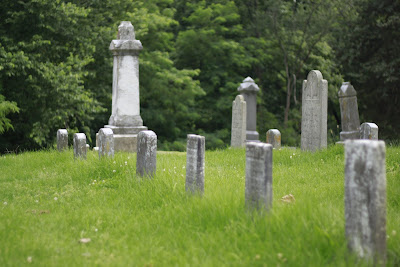 I WAS ONLY EIGHT YEARS OLD;
And before I grew up and knew what it meant
I had no words for it, except
That I was frightened and told my Mother;
And that my Father got a pistol
And would have killed Charlie, who was a big boy,
Fifteen years old, except for his Mother.
Nevertheless the story clung to me.
But the man who married me, a widower of thirty-five,
Was a newcomer and never heard it
Till two years after we were married.
Then he considered himself cheated,
And the village agreed that I was not really a virgin.
Well, he deserted me, and I died
The following winter.


I suspect that Edgar Lee Masters' Spoon River Anthology doesn't get the respect it deserves today because no English professor is needed to fully appreciate the work. Not all poetry has to be "analyzed."

The concept is terrific: The setting is a hillside graveyard in a small town. The 243 brief (none longer than 45 lines) poems in the work are the voices of the dead buried there. Each poem is titled with the dead person's name. Some poems are poignant, some angry, some inspiring. The scope of human experience depicted is remarkable.

From the forward to the edition I own:

Here we find all manner of humankind, the hopeful and the morose, the enchanted and the disillusioned, the victims and the victimizers. Here we find poets, priests, and prostitutes all lying side by side on the hill....Each of the characters has a message to deliver -- a secret thing to reveal -- but if there is one message that governs all the others it is that death levels all of humanity: the one true democracy is that of the village graveyard.

If you care to sample the Anthology, some clever fellow has put the entire thing online.