Would you rather work in a Nursing Home or a Slaughterhouse? 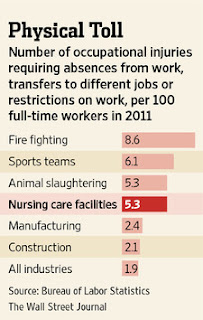 According to this excellent article in yesterday's Wall Street Journal, working in a nursing home is as physically taxing as working in a slaughterhouse. They don't mention this, but I would imagine that it is as psychologically taxing as well. Killing animals isn't good for the soul (which is why working in a slaughterhouse is not considered an approriate occupation for someone on the Path to Buddhist Enlightenment; neither is being an arms dealer, by the way). Growing attached to the sick and dying, being exposed daily to human frailty, spending more time caring for them than their own family members, and then suffering serial bereavements can't be good for you, either.

I recently conducted a Social Security Disability Examination of a woman in her 50s who had developed a chronic major depression from working in a nursing home (that wasn't the only factor, but it was front and center). The crazy thing is, if you consider Food Stamps (SNAP) and the money she will get from Social Security Disability, she will only be making a thousand dollars less a year than she did when she was working full time for $12.00/hour at the nursing home (that wage reflects her 30 years of experience as a Certified Nursing Assistant). Not only is the work physically brutal and spiritually draining, but the pay is lousy.

As the Baby Boomers start becoming increasingly demented, we might have to draft warm bodies to provide care to them. One possible approach would be to make two years of service in a nursing home a pre-requisite for receiving Federal student loans for college. (Of the 20 million people who attend college each year in the U.S., 12 million (60%) borrow to cover costs; source). The Journal predicts that we will need 1.5 million more workers in the nursing care industry within the decade, so that ought to do the trick. You could even mandate minimum staffing levels (e.g., one CNA per shift for every six patients) and try to improve care and working conditions at the same time. The downside is that by the time they make it to college, those who worked in nursing homes will be depressed and have bad backs.

Some Excerpts from the article:


A labor shortage is worsening in one of the nation's fastest-growing occupations—taking care of the elderly and disabled—just as baby boomers head into old age.

Nursing homes and operators of agencies providing home-care services already are straining to find enough so-called direct-care workers, who help the elderly or disabled with such things as eating and bathing. They also face looming retirements in the current workforce, in which one-fifth of workers are 55 years old or older.

The reasons for the shortage: pay is low, typically less than $12 an hour, injury rates are high, and the work can be unpleasant and physically draining.

Demand will continue to grow. The number of Americans 65 years and older is projected to reach 73 million in 2030, up from 40 million in 2010. Serving that growing population will require five million direct-care workers in 2020, up 48% from the 2010 level, according to U.S. government projections.

Such demands lead to high labor turnover. Between 43% and 75% of nursing aides turn over each year, various studies have found. That compares with a 28% rate for all health-care and social-assistance jobs in 2012, according to U.S. government data.

Becoming a nursing aide is fairly easy. The federal minimum-training requirement is 75 hours, though some states require 150 to 175 hours. No college degree is needed, and even high-school degrees aren't always required.

Low pay doesn't help. The median hourly wage for nursing aides is $11.74, according to the U.S. Labor Department, compared with $16.71 per hour for all occupations.

"These people are the actual backbone of nursing-home care," says Lew Little, chief executive officer of Harden Healthcare LLC, Austin, Texas. Hourly pay for nursing aides at some of Harden's nursing homes in Texas starts at $8.25, or $1 above the minimum wage.

"We'd love to be in a position" to increase aides' pay, Mr. Little says. But he sees "no clear path" toward higher wages because of cutbacks in Medicaid and Medicare reimbursements, the main source of operators' revenue.

Sonia Dhaliwal, 27, another aide at Cottonwood, is a native of India. While she was helping a resident put on socks one day, the resident punched her in the eye. "You have to be ready physically and mentally," she says. Even so, Ms. Dhaliwal says: "They're our family. We really do love them."