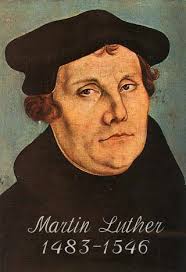 "I don't share the opinion that suicides are certainly to be

damned. My reason is that they do not wish to kill themselves


but are overcome by the power of the devil. They are


like a man who is murdered in the woods by a robber.


However, this ought not be taught to the common people,


lest Satan be given an opportunity to cause slaughter, and I


recommend that the popular custom be strictly adhered to


according to which it [the suicide's corpse] is not carried


over the threshold, etc. Such persons do not die by free


choice or by law, but our Lord God will dispatch them as


He executes a person through a robber. Magistrates should


treat them quite strictly, although it is not plain that their


souls are damned. However, they are examples by which


also that we should be diligent in prayer. But for these


examples we would not fear God. Hence He must teach us


G. Tappert (Philadelphia: Fortress Press, 1967), p. 29.
Got it? God randomly executes people by suicide in order to 1) teach us to fear Him; 2) give us an appreciation of the power of Satan; and, 3) keep us diligent in prayer. The victims of suicide are blameless, but we should act as if they are sinners in order to keep people on the right path.