"Democracy May Have Had Its Day" -- Donald Kagan 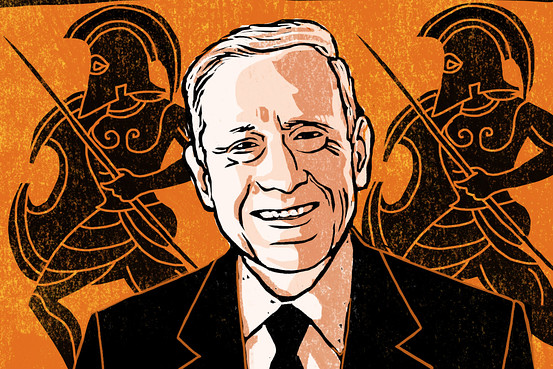 Born in 1932 in a Lithuanian shtetl, Mr. Kagan was raised in Brownsville, which was then a working-class Jewish neighborhood. He rooted for the Yankees on Brooklyn Dodgers turf—"everything you need to know about him," as his son Robert, the neoconservative writer, once said. He was a high school fullback. Mr. Kagan is personally warm, always tough and occasionally smart alecky. Imagine Robert DeNiro as an eminent conservative scholar of ancient Athens. He has no patience for "nonsense" or "wrong ideas." He's a guy who'll tell you what's what and that's that. Generations of faculty and students came away bruised from Kagan encounters.

The tussles over course offerings and campus speech of course speak to something larger. Democracy, wrote Mr. Kagan in "Pericles of Athens" (1991), is "one of the rarest, most delicate and fragile flowers in the jungle of human experience." It relies on "free, autonomous and self-reliant" citizens and "extraordinary leadership" to flourish, even survive.

These kinds of citizens aren't born—they need to be educated. "The essence of liberty, which is at the root of a liberal education, is that meaningful freedom means that you have choices to make," Mr. Kagan says. "At the university, there must be intellectual variety. If you don't have [that], it's not only that you are deprived of knowing some of the things you might know. It's that you are deprived of testing the things that you do know or do think you know or believe in, so that your knowledge is superficial."

As dean, Mr. Kagan championed hard sciences, rigorous hiring standards for faculty, and the protection of free speech. Those who see liberal education in crisis return to those ideas. "Crisis suggests it might recover," Mr. Kagan shoots back. "Maybe it's had its day. Democracy may have had its day. Concerns about the decline of liberty in our whole polity is what threatens all of the aspects of it, including democracy."

In 1987, he stepped in for a year to direct Yale's athletic department—probably the only classics professor ever to hold the post anywhere. His first initiative was to call to disband the NCAA or take Yale out of it. "I wish I had," he says. "It's so disgusting, it's so hypocritical, it's so wicked. The NCAA is just a trade organization meant to increase profits."

With the end of the Iraq and Afghanistan wars, the U.S. is slashing defense again. "We do it every time," Mr. Kagan says. "Failing to understand the most elementary childish fact, which is: If you don't want trouble with somebody else, be sure he has something to be afraid of."

Brownsville, not Thucydides, taught him that. "Any kid who grows up in a relatively tough neighborhood gets quick early lessons in what the realities are," he says. His 1995 book, "On the Origins of War," made a moral and strategic case to exert as much effort and money to safeguard peace as to win a war.

Thucydides identified man's potential for folly and greatness. Mr. Kagan these days tends toward the darker view. He sees threats coming from Iran and in Asia, yet no leadership serious about taking them up. The public is too ignorant or irresponsible to care. "When you allow yourself to think of it, you don't know whether you are going to laugh or cry," he says.

The Kagan thesis is bleak but not fatalistic. The fight to shape free citizens in schools, through the media and in the public square goes on. "There is no hope for anything if you don't have a population that buys into" a strong and free society, he says. "That can only be taught. It doesn't come in nature."


So...how are we doing with regard to "free, autonomous, and self-reliant" citizens? (How about "extraordinary leadership"?) Consider that people who live paycheck to paycheck are by no definition "self-reliant" -- they are beholden to their employers, engaged in indentured servitude, subject to petty tyrannies.

You can take Professor Kagan's course on Ancient Greek History at Yale Open Courses (free). What a great way to spend your leisure time. Be sure to purchase and read the required texts as well, if you actually want to learn anything. In my opinion, online learning without required reading is a waste of time, not learning at all. The last three books on the list are books that every educated person should read.

The Ancient Near East and Greece, 2nd Ed.
Donald Kagan
MacMillan
[Good luck finding a copy of this!]

The Rise and Fall of Athens
Plutarch