More Americans die by suicide than in car crashes 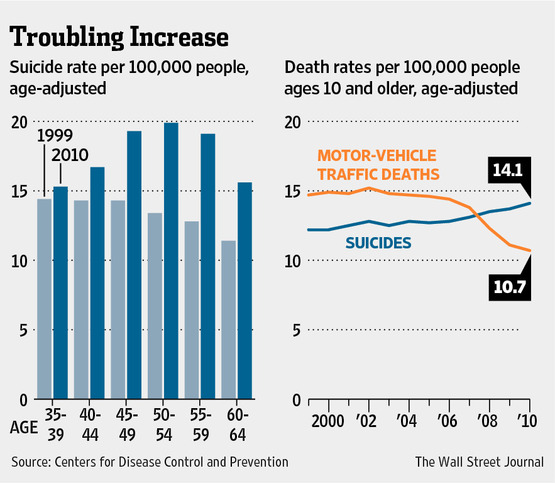 From the Wall Street Journal:


"The number of deaths caused by suicide has risen precipitously in the last decade, surpassing those caused by car crashes and even some of the most fatal diseases, according to a government report released Thursday.

The number of suicides in a year rose 31% to 38,364 in 2010 from 29,181 in 1999, according to the Centers for Disease Control and Prevention. For adults aged 35 to 64, the group most responsible for the increase, suicide is now the fourth most common cause of death behind cancer, heart disease and unintentional injury such as drowning. That is up from the eighth spot in 1999.

Suicide rates for youth and elderly remained steady. But suicide rates for working adults were double that of the other demographics, with people in their 50s showing the highest numbers. That is troubling to public health officials, since most of the resources targeted at preventing suicide have traditionally been earmarked for students and senior citizens."


The article then remarks on the correlation between suicide rates and economic conditions. However, please note that the suicide rate has been climbing steadily since 1999, so the 2008 economic collapse and protracted post-recession doldrums cannot fully account for the rise.

The article then recounts an anecdote about somebody's brother who died by suicide. It's hard to fit the case into a "the recession is making people kill themselves" storyline because the victim had bipolar illness. When you are reading a "hard news" story and you get to the anecdote section, it is safe to skip it. The reporter thinks it illustrates the dry facts that have been presented and "brings them to life," but 9 times out of 10 these nonrandomly selected vignettes are just a distraction.

The article does point out that prior prevention efforts have been aimed at adolescents and older adults, but it is the the middle-aged (35 to 64) who are behind the current surge.

Here's the most appalling fact in the article:


Of course, another aspect of this story is the amazing drop in motor vehicle death rates. I'm assuming that credit belongs to the engineers who design air bags, passenger restraint systems and crumple zone technology. Credit also to small towns and local hospitals who have invested in LifeFlight helicopter service so MVA survivors in the boondocks can quickly get to Trauma 1 Centers. And to the EMTs and ER docs who have gotten so good at keeping people from going into shock. And the fact that drunk-driving is less common that it used to be, due to increased enforcement and harsher punishments, especially for repeat offenders. And might we be driving less since the 2008 recession?