So wait -- decreasing death rates from stroke is not all good news?

[O]ver the past 50 years, health care hasn’t slowed the aging process so much as it has slowed the dying process. And, as my father demonstrates, the contemporary dying process has been elongated. Death usually results from the complications of chronic illness—heart disease, cancer, emphysema, stroke, Alzheimer’s, diabetes.

Take the example of stroke. The good news is that we have made major strides in reducing mortality from strokes. Between 2000 and 2010, the number of deaths from stroke declined by more than 20 percent. The bad news is that many of the roughly 6.8 million Americans who have survived a stroke suffer from paralysis or an inability to speak. And many of the estimated 13 million more Americans who have survived a “silent” stroke suffer from more-subtle brain dysfunction such as aberrations in thought processes, mood regulation, and cognitive functioning. Worse, it is projected that over the next 15 years there will be a 50 percent increase in the number of Americans suffering from stroke-induced disabilities. Unfortunately, the same phenomenon is repeated with many other diseases.

So American immortals may live longer than their parents, but they are likely to be more incapacitated. Does that sound very desirable? Not to me.

The situation becomes of even greater concern when we confront the most dreadful of all possibilities: living with dementia and other acquired mental disabilities. Right now approximately 5 million Americans over 65 have Alzheimer’s; one in three Americans 85 and older has Alzheimer’s. And the prospect of that changing in the next few decades is not good. Numerous recent trials of drugs that were supposed to stall Alzheimer’s—much less reverse or prevent it—have failed so miserably that researchers are rethinking the whole disease paradigm that informed much of the research over the past few decades. Instead of predicting a cure in the foreseeable future, many are warning of a tsunami of dementia—a nearly 300 percent increase in the number of older Americans with dementia by 2050.

I think that a 50% prevalence rate of dementia in those aged 85 or older is more accurate.

What will the younger generations be doing as the Baby Boomers slowly die? Working as Occupational Therapists, geriatric nurses, nursing home administrators, etc. We might even need a National Service draft-like system in order to provide sufficient care, in case our current strategy of importing cheap nursing home labor from Central America fails. 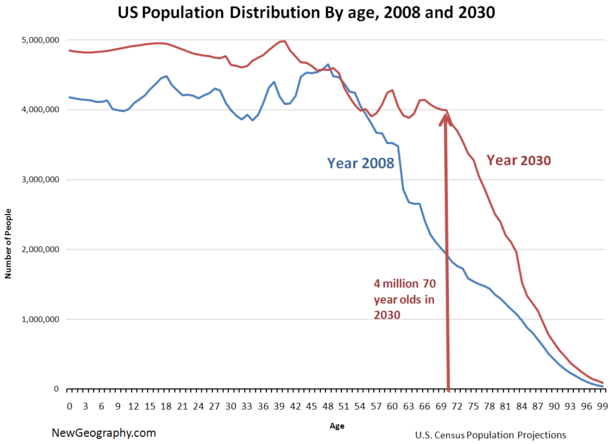