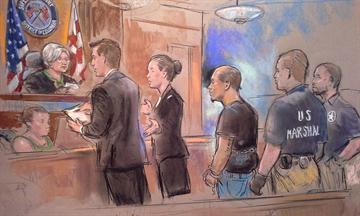 Mr. Gonzalez's friends and family described him as a dedicated soldier who returned home so paranoid about an unnamed "they" that he kept rifles and shotguns behind the doors and patrolled the perimeter of his home near Fort Hood, Texas.

"He's a standup guy—he's a hero," said Jerry Murphy, the son of Mr. Gonzalez's former wife. "He sacrificed his mind and his body for his country."

Mr. Murphy and his mother, Samantha Bell, said a military psychiatrist treated Mr. Gonzalez for post-traumatic stress disorder and paranoid schizophrenia before his medical retirement from the military in 2012. Citing privacy laws, a military spokesman declined to provide details about any medical treatment.

The Department of Veterans Affairs provides Mr. Gonzalez with $1,652 in monthly disability payments. "However, at this time, it does not appear the veteran sought treatment in any VA health-care facility," a VA spokeswoman said.

Mr. Gonzalez served his first Iraq tour from October 2006 to January 2008, when he was based in Baghdad and manned a machine gun atop Humvees and Bradley fighting vehicles. On his second tour, he was stationed in Mosul. Known to his comrades as "Gonzo," he encountered firefights, roadside bombs and close-quarters combat, according other soldiers in B Troop, 4th Squadron, 9th Cavalry Regiment.

At times, insurgents would throw handmade teapot grenades at the scouts' passing vehicles, the soldiers recalled. "We saw a lot of dead bodies, a lot of shooting, a lot of people killed," said Sgt. 1st Class Michael Lashua, who shared a vehicle with Mr. Gonzalez in Iraq.

When Mr. Gonzalez returned to Fort Hood, Ms. Bell said he wouldn't discuss his experiences, except to say they were "very bad" and imply they involved children in some way.

Mr. Gonzalez took to walking around the house with a pistol on his hip, peeking out through the blinds. He worried "they" were pumping poison in through the vents, said Ms. Bell, who left him in 2010. He patrolled the yard looking for footprints, compulsively checked the locks and kept weapons behind the living-room and bedroom doors. "He wasn't violent—he was a great guy," she said. "It was just those bizarre behaviors. I couldn't deal with it anymore."

One time he closed the blinds while Ms. Bell was running on a treadmill in the same room. "'I'm closing the blinds because they're looking in,'" she remembered him saying. "He always said 'they' but would never tell me who." A fellow soldier who knew Mr. Gonzalez well recalled that he was unable to sleep well and was troubled by nightmares. "He wouldn't hurt anybody ever," the soldier said.

Mr. Gonzalez was medically retired from the military because of a disability related to severe plantar fasciitis, his former wife said.

Among the awards he received were three Army Commendation medals, one Army Achievement Medal and an Army Good Conduct Medal, according to his records.

"Omar has an illness," said Ms. Bell. "I would love for that to be treated. I don't want him to be punished."

Secret Service agents reported that after his apprehension inside the White House, Mr. Gonzalez said he was "concerned that the atmosphere was collapsing" and that he needed to get unspecified information to the president.

At Monday's hearing, Magistrate Judge John Facciola asked Mr. Gonzalez's public defender, David Bos, if his client appeared to suffer from any mental disease or deficiency. Mr. Bos said there was no basis for a court-ordered competency evaluation. "Sadly, many of my clients suffer from mental illnesses—including PTSD—but are still competent to stand trial," he said in an email after the hearing.